Churchill Downs is home to one of the most iconic sporting events in world, the Kentucky Derby. Beyond the Run for the Roses, however, the famous Twin Spires have been the backdrop for some of the most memorable moments in horse racing history. Since opening in 1875, the landmark racetrack has undergone several cosmetic makeovers but the mystique remains. Racing at Churchill Downs takes place in the spring, September and late fall.

Churchill Downs has a one mile dirt track as well as a turf course that is seven-eighths of a mile. The dirt surface is as unique as the twin spires as it has a thick clay base atop a sandy loam sub-layer. On top, the mixture is a mix of river sand, silt and clay. While the surface has proven to be extremely safe, some great horses over the years, such as Skip Away, have been unable to perform successfully over the track. 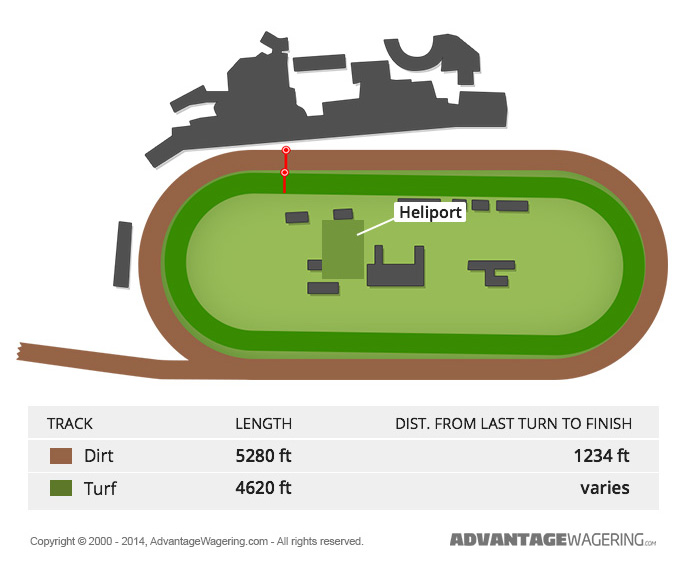 The racing at Churchill Downs is some of the best around the United States. In addition to being the home of the Kentucky Derby (G1), the racetrack has also hosted the Breeders’ Cup eight times and has been the showcase for some of the sport’s greatest champions. With a spring meet that runs from the end of April to July along with a short meet in September before the fall meet kicks off from October to Thanksgiving, the heralded Kentucky racetrack offers nearly year-round action.

The Kentucky Derby is not only the most notable race is Churchill Downs history but the most well-known race in all of sports. The definitive race for three-year-olds, the mile and a quarter contest is known as the most exciting two minutes in sports. Since it began in 1875, some of the all-time greats of the sport like Secretariat and Seattle Slew have triumphed in the Derby on their way to winning the coveted Triple Crown. The blanket of roses remains one of the most sought-after trophies in horse-racing.

While several special fillies have taken on male rivals and won the Kentucky Derby, the Kentucky Oaks, restricted just to three-year-old fillies, is an accomplishment in its own right and is held the Friday before the Derby. In recent years, the most impressive victory was Rachel Alexandra’s remarkable 20 ¼ length romp which she used as a stepping stone to defeat the boys in the Preakness (G1), Haskell (G1) and Woodward (G1) that year on her way to a Horse of the Year title.

The Woodford Reserve Turf Classic, since its inception in 1987, has routinely been one of the most competitive and anticipated turf races in the United States. The race, which earned Grade 1 status in 1998, has never had a shortage of star power and has drawn star-studded fields. Two-time Horse of the Year Wise Dan has joined Manila, Opening Verse, Lure and English Channel as Breeders’ Cup winners to win the Turf Classic.

Find the best odds for your horse online and place your bets within minutes !